Thank you for the honor to speak to you today and to lead the close of today’s ceremony with the Kaddish, the Jewish Mourners Prayer. It has been mentioned that members of the Polatschek Family have traveled from Israel, Switzerland, Thailand and Uruguay.  I am originally from New York but now I live in Asia.  I am the Polatschek representative from Thailand. 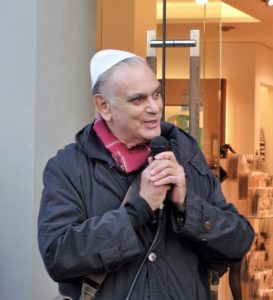 A few days ago, I had an emotional conversation with my Thai friend Jinjira.  I told her I was going to Germany for two weeks.  She immediately associated Germany with a “bad man.”  She continued, “I think he hurt many people.”  “Yes,” I responded, and I told her the large number we all know too well. Jinjira had no discernible reaction.  How does one react to such an irrational and incomprehensible number?  Can one react?  As a New Yorker, I calculate that, for example, three quarters of the population of my home city simply disappeared.  That insane statistic is unimaginable.

I had a pleasant surprise a few minutes ago!  The choir performed “Down by the Riverside,” a Negro Spiritual composed before the American Civil War, and as we have heard, a song of joy and hope.   I thank the American choirmaster for making that choice. In the south of the United States to this very day, the cemetery music accompanying an African-American funeral procession is solemn and sad.  But as the mourners leave the cemetery, the music changes dramatically to raucous Dixieland jazz accompanied by boisterous singing and dancing!   Mourners of the deceased become celebrants of life, a phenomenon everyone understands.

I propose that there is a connection between the popular song “Down by the Riverside” and the prayer we are about to recite, the Kaddish, the universal Jewish Mourners Prayer. In every Jewish prayer book, the Kaddish is written with the ancient letters of the Hebrew alphabet.  Yet, the words are not Hebrew words.  They are mostly Aramaic words! Two thousand years ago, and for centuries thereafter, Aramaic was the lingua franca, the common spoken Semitic language of the northern Middle East.  The Mourners Prayer, unlike the more ancient Hebrew prayers, is a prayer that everyone understood.

What is also fascinating about the Mourners Prayer is that it is not about mourning!  There is no mention of the deceased in the prayer.   There is no hint of sorrow or sadness or death. The Kaddish honors G-d and gives thanks to G-d for creating the world.  The Kaddish anticipates a world of abundance and a world of peace.  Like the words of the Spiritual, and like the folks dancing and singing after a funeral, the recitation of the prayer evokes optimism for a golden future.

I know of one other Aramaic passage in the Jewish liturgy.  The passage is in the Haggadah, the Hebrew text that is recited at the Seder, the Passover evening meal.  In the spring of each year, the joyous Passover holiday recounts and celebrates the Exodus from bondage in Egypt. The brief Aramaic passage in the Haggadah is near the beginning of the Seder.  The leader of the Seder raises the matzo or unleavened bread and recites the words, “Ha Lachma Anya – This is the bread of affliction.”

Translated, the entire Aramaic passage is:

My friends, we have assembled here today to honor and to mourn our lost family and friends.  Let us never forget them or the sad events of the past. But as we depart from the glistening Stolpersteine here in Ulm, let us remember the positive and optimistic Aramaic passages that form the bedrock of our tradition:

To be generous and charitable to those in need.

To strive for a world of peace.

To thank G-d for His works and for our good fortune.

The Mourners Prayer – the Kaddish

Glorified and sanctified be G-d’s great name throughout the world
which He has created according to His will.

May He establish His kingdom in your lifetime and during your days,
and within the life of the entire House of Israel, speedily and soon;
and say, Amen.

May His great name be blessed forever and to all eternity.

Blessed and praised, glorified and exalted, extolled and honored,
adored and lauded be the name of the Holy One, blessed be He,
beyond all the blessings and hymns, praises and consolations that
are ever spoken in the world; and say, Amen.

May there be abundant peace from heaven, and life, for us
and for all Israel; and say, Amen.

He who creates peace in His celestial heights,
may He create peace for us and for all Israel;
and say, Amen.